What Is The Formula For Calculating CAGR (Compound Annual Growth Rate)

The CAGR or compound annual growth rate is the average rate at which an investment grows over time assuming that it was compounded (re-invested) annually (periodically).

CAGR has nothing to do with the value of an investment in the intermediate years as it depends only upon the value in the first year and the last year of the investment tenure.

The formula for CAGR is:

Applying CAGR Formula with an example

Let's see how to use the above formula. Suppose we have following data for years and the investment value in the respective year.

As you can see in the above table the investement starts from year 2008and ends in year 2016. So, here the total number of period for which we want to calculate CAGR is 9 years ( year 2008 is also taken into account). Next, in the table the value for the year 2008 and 2016 is $1000 and $2507 respectively. Applying these known values into the above mentioned formula, we have:

The expression would be :

Another Example with CAGR Formula

The expression for calculation would be :

Your investment in Amazon.com Inc stocks would had grown at CAGR of 28.67 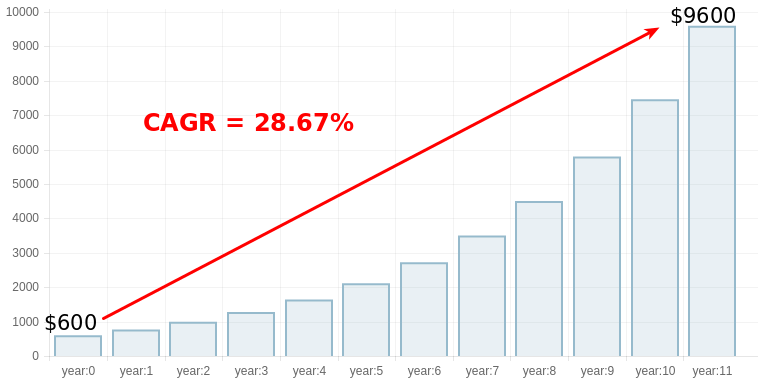